Shakespeare at the University Libraries

The University of Nebraska-Lincoln Libraries has a strong collection of materials relating to Shakespeare and his works. The Shakespeare First Folio is the premiere volume in the collection that also includes rare quartos printed in the 1600s and 1700s, books that were owned by distinguished individuals, engraved illustrations of scenes from the plays, and prompt books as far back as the 1770s for Shakespearian actors at Covent Garden and Drury Lane, London.

The 1623 edition of Shakespeare’s works is known as the “First Folio” because it was the first printing of all of his plays in one volume. The First Folio includes thirty-six plays arranged by comedy, history, and tragedy. Eighteen of the plays had not been published prior to this volume.

Among the former owners of this copy of the first folio edition of Shakespeare’s plays was the author and antiquary John Gage Rokewode (1786-1842), a descendant of Ambrose Rookwood, a co-conspirator of the Gunpowder Plot of 1605, which was an organized attempt to assasinate King James I. Rokewode studied law under Charles Butler, and after being admitted to the bar in 1818, he was appointed a fellow of the Society of Antiquaries and the Royal Society. From 1829 to his death, he was director of the Society of Antiquaries. His published works include several monographs and essays on Suffolk history, medieval social history, archaeology, and the study of illuminated manuscripts. See: Sidney Lee (ed.), Dictionary of National Biography. Vol. XLIX (New York: The Macmillan Co., 1897), 156-57. 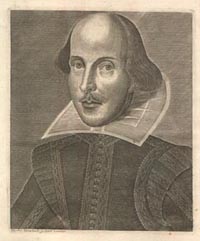 Among early quartos of individual Shakespeare plays, the University Libraries houses copies of the 1674 version of Macbeth, a circa 1686 edition of Julius Caesar, and the 1703 Hamlet. 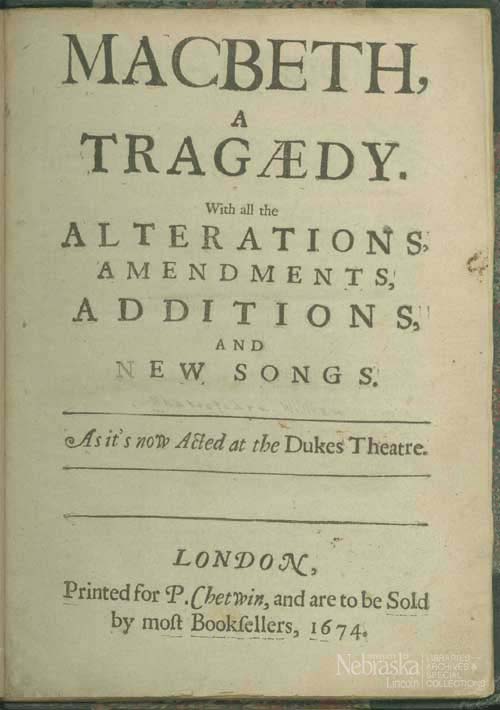 Macbeth, a tragædy. With all the alterations, amendments, additions, and new songs. As it’s now acted at the Dukes Theatre. London, Printed for P. Chetwin, 1674. Alterations and additions by Sir William D’Avenant. 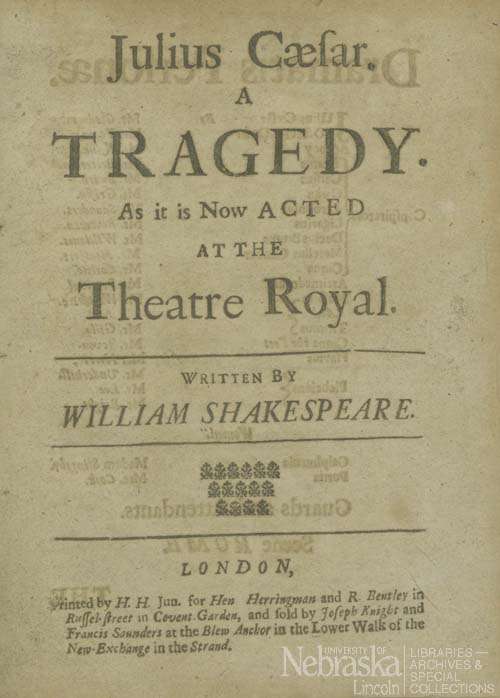 Julius Cæsar: A Tragedy. As it is now Acted At The Theatre Royal. Written by William Shakespeare. London, Printed by H.H. Jun. for Hen. Herringman, and R. Bentley in Russel-street in Covent-Garden, and sold by Joseph Knight and Francis Saunders at the Blew-Anchor in the Lower Walk of the New-Exchange in the Strand. [ca.1684]. 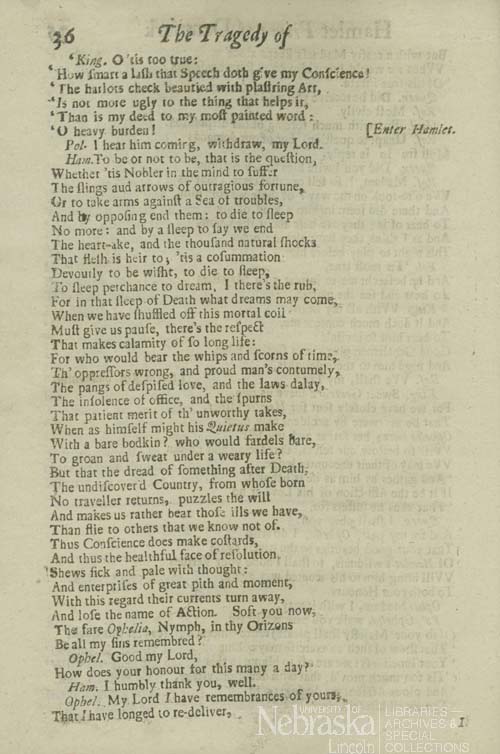 Hamlet’s famous soliloquy, Act 3, Scene 1, “To be or not to be….” The Tragedy of Hamlet Prince of Denmark. : As it is now acted by Her Majesties Servants. London. Printed for Rich. Wellington, at the Dolphin and Crown in Pauls Church-Yard, and E. Rumball in Covent-Garden., 1703. 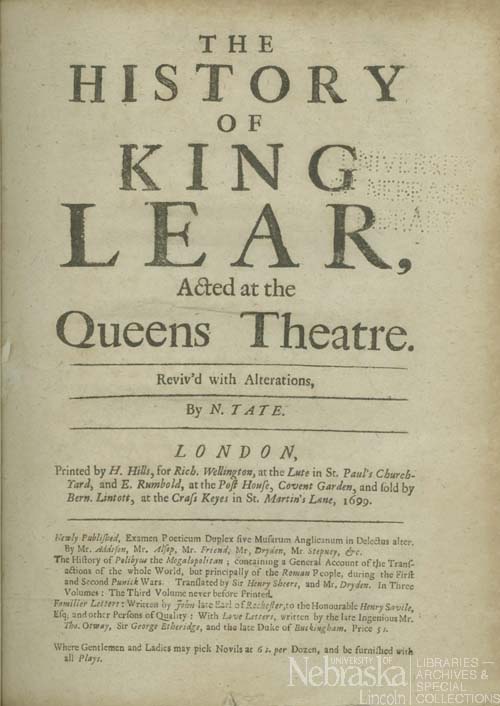 The History of King Lear, acted at the Queens Theatre. Reviv’d with alterations, by N. Tate. London, Printed by H. Hills, for R. Wellington and E. Rumbold, and sold by B. Lintott, 1699.

The University Libraries holds several original prompt books from the personal collection of Sir Augustus Harris (1851-1896), who was producer at Drury Lane Theatre (from 1879) and manager of Covent Garden Opera House (from 1888). The prompt books are dated between 1773 and 1822 and document the performance of several Shakespeare plays at the Theatres Royal, Covent Garden, and Drury Lane.

Actors involved in the plays relating to the prompt books include the brothers James William Wallack and Henry John Wallack, John Philip Kemble, among several other prominent names. More information about these individuals is found at the Encyclopedia Britannica’s “Shakespeare and the Globe, Then and Now.” 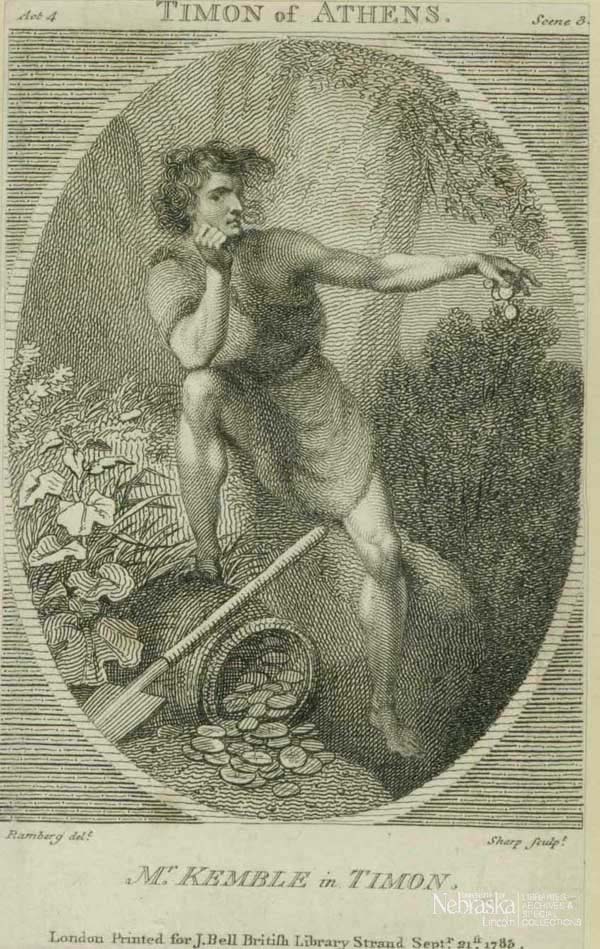 Shakespearian Actor John P. Kemble in Timon of Athens. This image is taken from a 1770s version of Bell’s edition of Shakespeare’s plays : as they are now performed at the Theatres Royal in London : regulated from the prompt books of each house by permission with notes critical and illustrative by the authors of the dramatic censor. 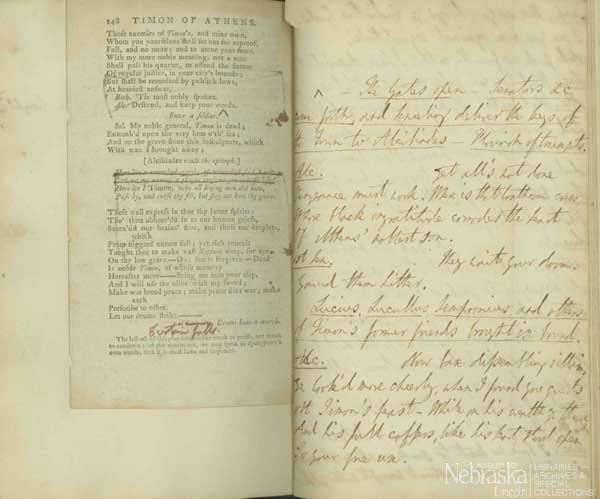 Timon of Athens : a tragedy / altered from Shakespeare London : Printed for John Bell, 1773. 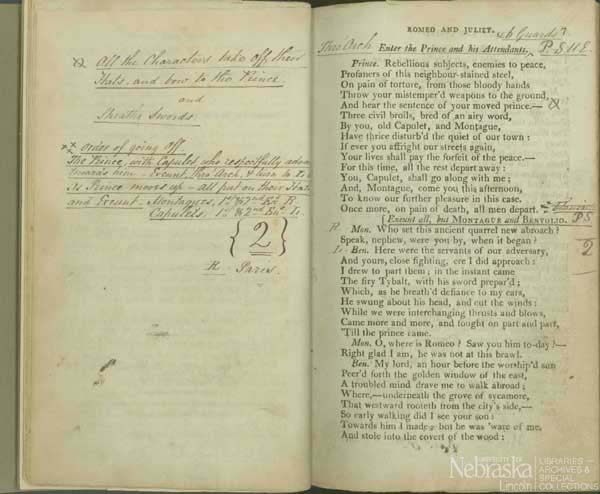 Shakespeare’s Romeo and Juliet : a tragedy / adapted to the stage by David Garrick ; revised by J.P. Kemble; and published as it is acted at the Theatre Royal in Covent Garden. London : Printed for the Theatre, 1811.

This scarce 1709 edition contains the following four sections: Venus and Adonis, The Rape of Lucrece, The Passionate Pilgrim, and Some Sonnets set to sundry Notes of Musick. This copy is from the personal library of William Borlase, and contains his crest of arms. Borlase, born 1695 in Cornwall, was a fellow of the Royal Society, a geologist, and author of several historical studies. He corresponded regularly with the English poet Alexander Pope. Borlase assisted Pope in designing and building his famous grotto. William Borlase died in 1772. 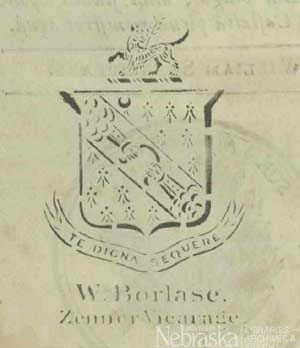 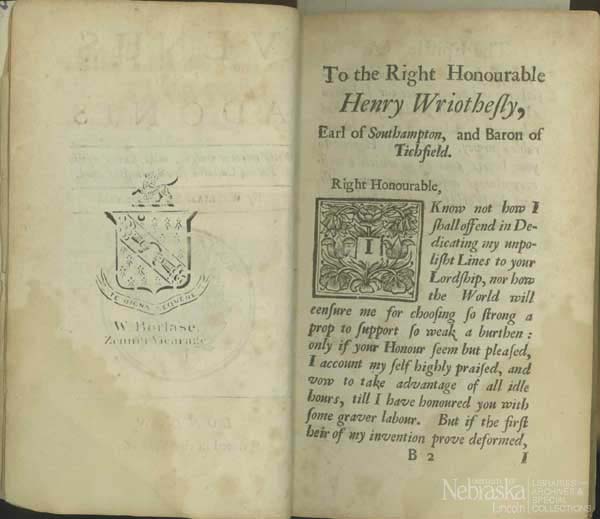 In 1785 delegates of the Oxford University Press presented this six volume set of Shakespeare’s works to Miss Phillis Blake in honor of her uncle Jonathan Toup. Toup was a Greek scholar who earned his M.A. from Exeter College, Oxford, and was chiefly known for his publications on Suidas, Longinus, and Theocritus.

Each of the six volumes is inscribed with the following handwritten dedication by the delegates of the Oxford University Press:

A present from the Delegates of the University Press, Oxford,

in acknowledgement of her communication of the valuable MSS

of her late Uncle, Jonathan Toup, A.M.: – to whose memory a

monument is likewise created at their charge in the chancel of

The following inscription appears within the title pages of Volume 1 and details the inscription on the monument at St. Martin’s Church in Cornwall. 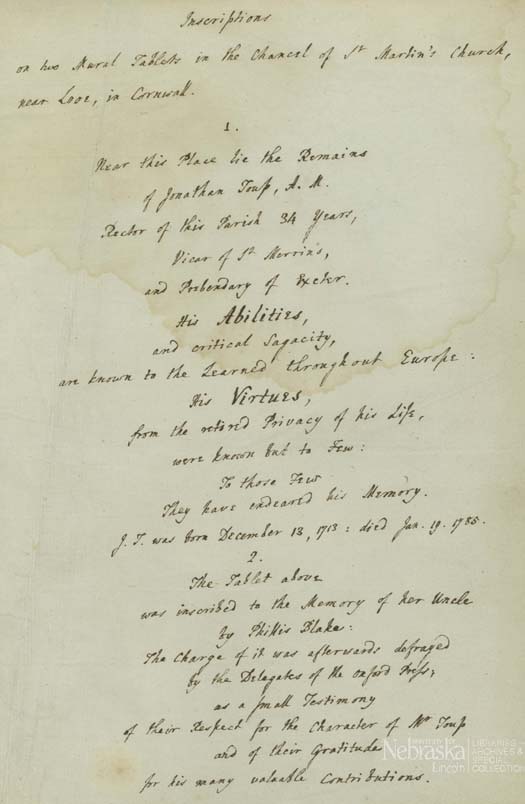 Inscriptions
on two Mural Tablets in the Chancel of St. Martin’s Church,
near Looe, in Cornwall.

Near this Place lie the Remains
of Jonathan Toup, A.M.
Rector of this Parish 34 years,
Victor of S. Merrins,
and Prebendary of Exeter.
His Abilities,
and critical sagacity,
are known to the Learned throughout Europe:
His Virtues,
From the retired privacy of his Life,
Were known but to Few:
To those Few
They have endeared his Memory.
J.T. was born December 13, 1713: died Jan. 19. 1785.

2.
The Tablet above
Was inscribed to the Memory of her Uncle
By Phillis Blake:
The charge of it was afterwards defrayed
By the Delegates of the Oxford Press,
as a small Testimony
of their Respect for the Character of Mr. Toup
and of their Gratitude
for his many valuable contributions.

Illustrations of the Plays 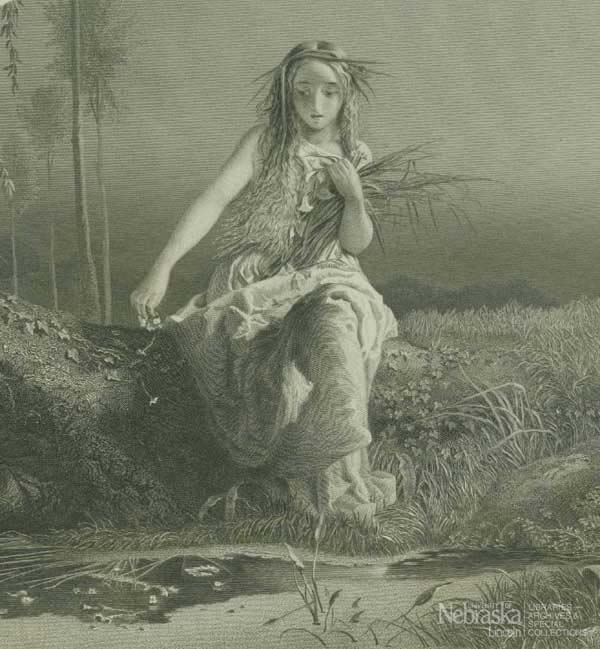 Ophelia, Plate 22, Engraved by C. Cousen after a painting by A. Hughes. 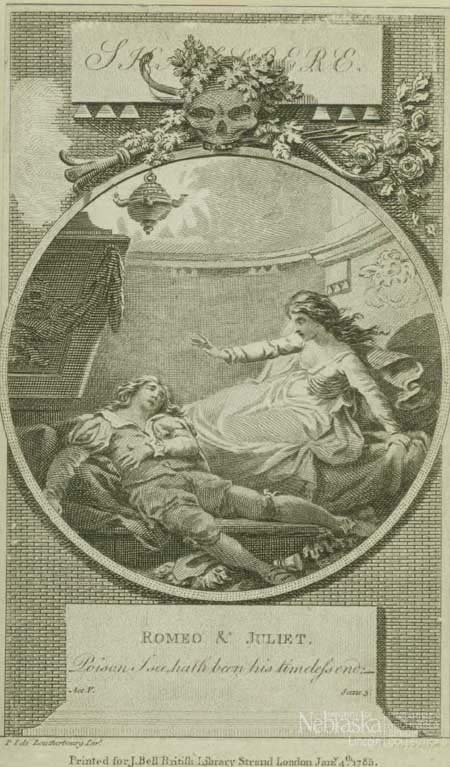 Romeo and Juliet, Act 5, Scene 3, “Poison I see hath been his timeless end, ” from Bell’s Shakespeare.

The last two images are from a 1770s version of Bell’s edition of Shakespeare’s plays : as they are now performed at the Theatres Royal in London: regulated from the prompt books of each house by permission with notes critical and illustrative by the authors of the dramatic censor. 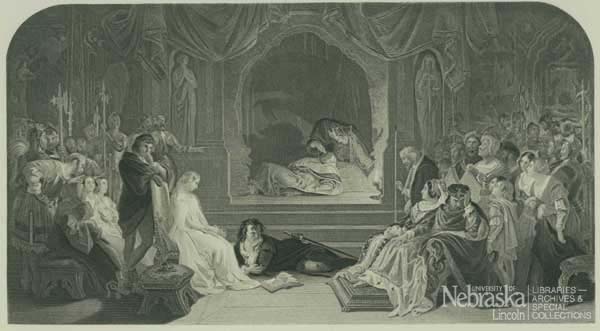 Hamlet, Plate 10, Engraved by C. Rolls after a painting by D. Maclise. 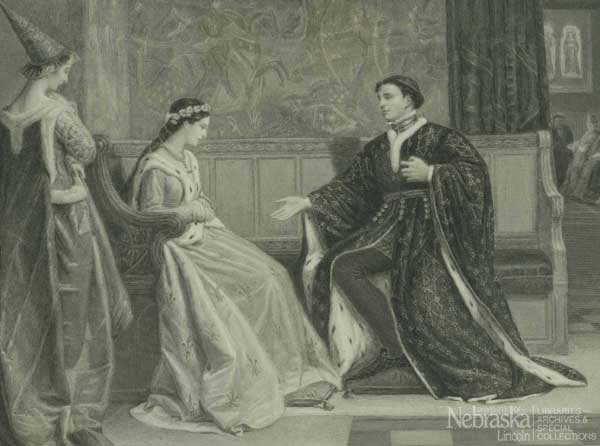 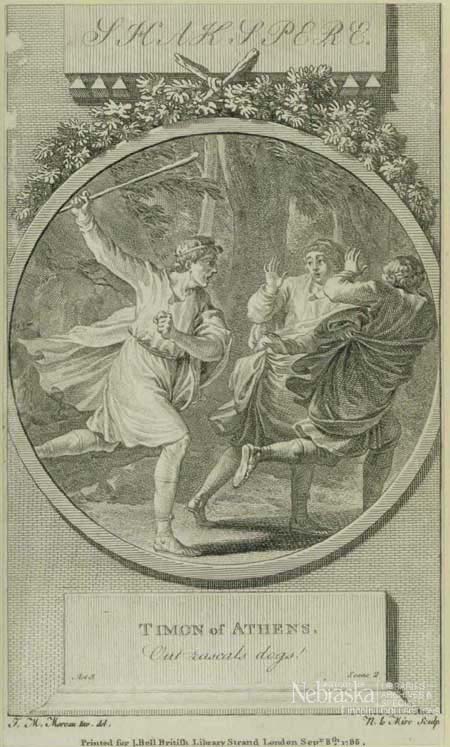