Archives & Special Collections houses two letters, or military requests, relating to Napoleon Bonaparte. Thanks to the help of Patrice Berger, former director, University Honors Program & professor emeritus of History and Laura Damuth, associate director, University Honors Program, we now have transcriptions of the original text in French, translation of the letters in English, and brief historical information about the letters.

A letter from the General of the Division Bons of the Army of the Orient requesting that Captain Charbond be promoted to the rank of Battalion Chief for his exemplary service in the Battle of the Pyramids in Egypt. Napoleon granted the request on 31 July 1798, with his full signature.

In May of 1798 General Napoleon Bonaparte, the head of the French Army of the Orient, sailed to Egypt from Toulon, France.  The Directory, a five-member committee which governed France from 1795-1799, had agreed to support Napoleon’s proposal to launch a military expedition in order to secure French trade interests in Egypt and Syria while at the same time threatening and destabilizing British access to India and the East Indies.

Napoleon and his army arrived in Alexandria, Egypt on the first of July after having first invaded and conquered Malta.  Bonaparte amassed 25,000 troops about nine miles from the pyramids of Giza, and engaged the Mamluks, the military force currently in Egypt, at the Battle of the Pyramids on the 21st of July, 1789.

This letter of commendation dated on July 31 from Division General Bon to Napoleon Bonaparte recommends a promotion for Captain Charbond to the rank of Battalion Chief for his exemplary service in the Battle of the Pyramids.  Notice that Napoleon still uses the Republican calendar dating of the 13 Thermidor. 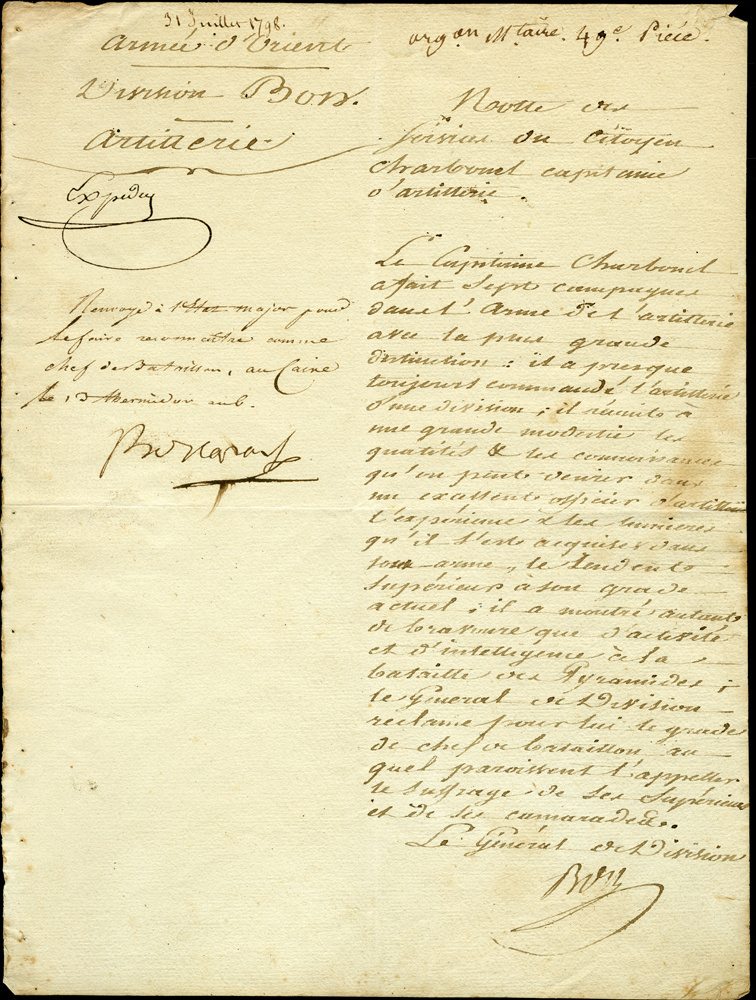 Army of the Orient

Note on the service of citizen Charbond, artillery captain

Captain Charbond has completed (made) 7 campaigns in the army and the artillery with great distinction.  He almost always commands the artillery of a division.  He combines with great modesty the qualities and knowledge that one wants in an excellent artillery officer.

The experience and the brilliance that he acquired in his armed forces is a performance above his actual rank.  He showed as much bravery as intelligence at the battle of the Pyramides.  The general of the division claims for him the rank of chef de bataillon, which appears to be supported by his superiors and his comrades.

Sent to the high command in order for him to be recognized as a chef de Bataillon,  From Cairo, 13th Thermidor, year 6.

A letter from Marshal Louis Alexandre Berthier (1753-1815) the Prince of Wagram and Neufchâtel, Switzerland, to Napoleon Bonaparte, Emperor of the French and King of Italy, requesting a three-month sick leave for Lt. Koch in the Spanish Army. Napoleon granted the request on 3 September 1810 by signing his initials “NB.”

Letter from the Peninsular war in Spain (1810), by Laura Damuth

Marshal Louis Alexandre Berthier (1753-1815), 1st Prince de Wagram, 1st Duc de Valangin, and 1st Sovereign Prince of Neuchâtel, was a Marshal and Vice-Constable of France serving as Chief of Staff to Napoleon.  This letter, addressed to Napoleon, requests a 3-month sick leave for second Lieutenant Koch, who had been suffering from intermittent fevers. Napoleon grants the leave – a testament to the level of military detail that Napoleon dealt with on a daily basis.

Berthier came from a long line of military leaders. He was born at Versailles, served with Lafayette in the American Revolution, and during the French Revolution, as Chief of Staff of the Versailles National Guard, he protected the aunts of Louis XVI and aided their escape. He later joined the Republican army and accompanied Napoleon to Italy during his Italian campaign (1796); eventually he joined Napoleon in Egypt, and in November 1799 he assisted with Napoleon’s coup d’etat in Paris on the 18 Brumaire. He was present at many of Napoleon’s major battles: Marengo, Austerlitz, Jena, and Friedland.  In 1808, Berthier was serving in the Peninsular War in Spain, during which time this letter was written.

Berthier goes on to serve with Napoleon in Russia in 1812, Germany in 1813, and France in 1814.  When Napoleon was exiled to the island of Elba, Berthier turned down the opportunity to accompany him.  He, however, did serve the Bourbon monarchy when Louis XVIII, brother of Louis XVI, entered Paris.   When Napoleon returned to France after Elba, Berthier retired to Bamberg, Germany where he died a few weeks later on June 1, 1815 by falling out of an upstairs window.  It is unclear if this was suicide, an assassination, or an accident. 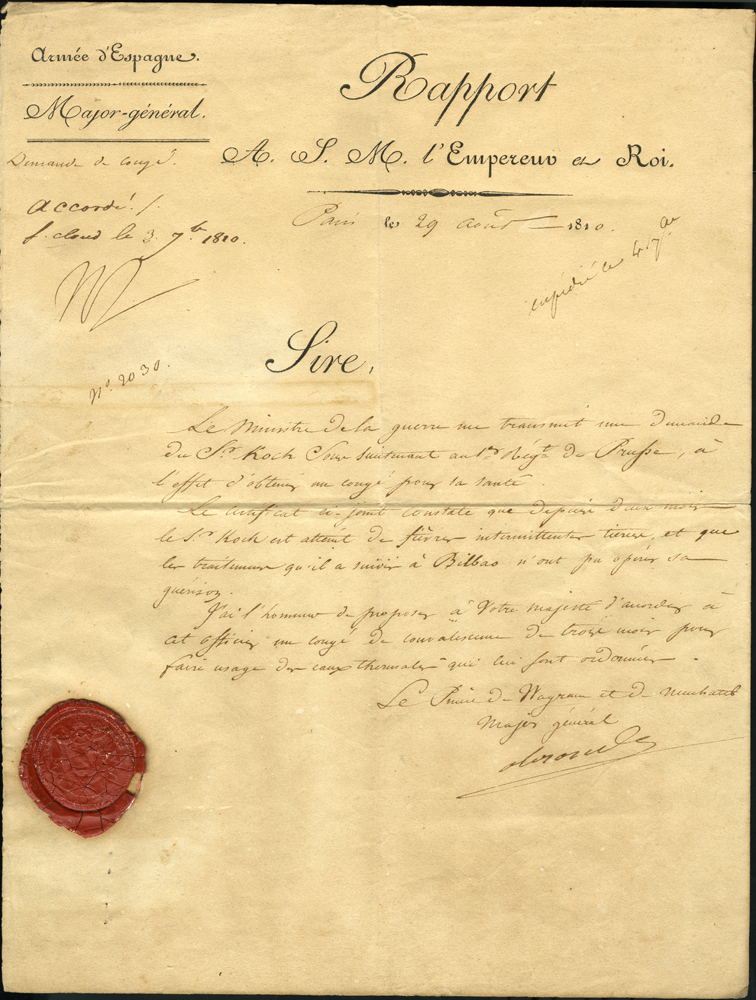 Request for Leave
To his majesty, Emperor and King

The War minister has sent me a request by Monsieur Koch, second lieutenant in the first Prussian regiment in order to obtain a leave for his health.

The attached reveals that for two months, Monsieur Koch has had intermittent fevers, and that the treatments that he followed in Bilbao did not yield a cure.

I have the honor to propose to your majesty to grant this officer a convalescent leave for three months to make use of thermal waters, which were prescribed for him.

The Prince of Wagram and of Neuchâtel, 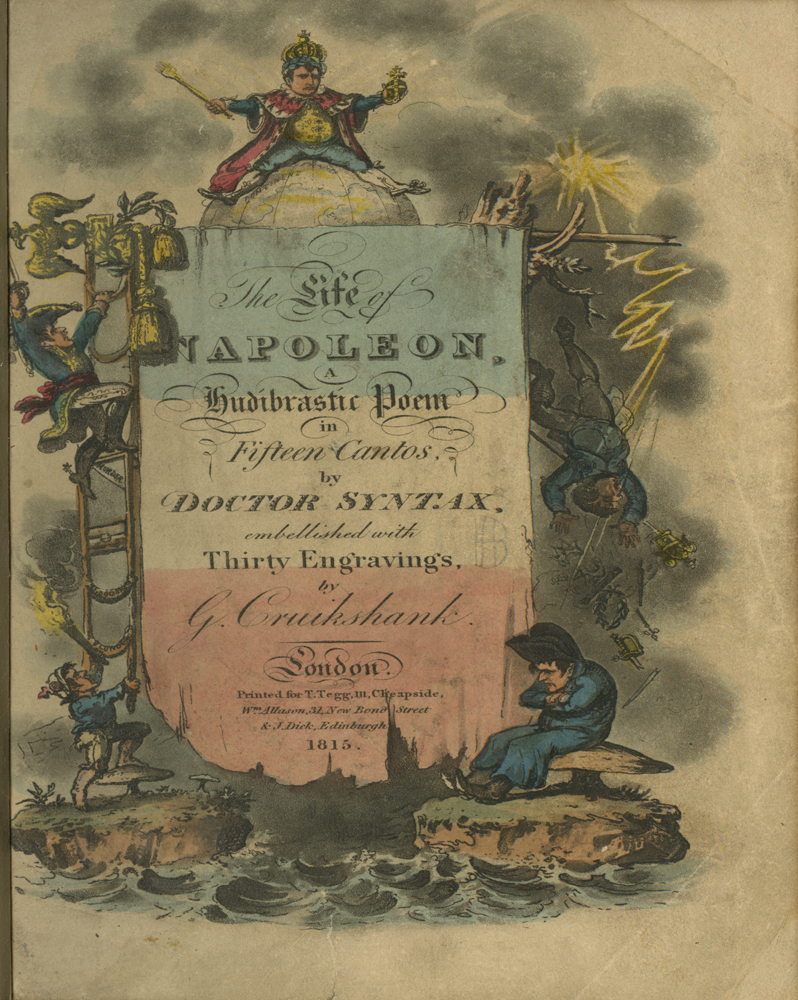